In the middle of L'Esterre Bay lies Sandy Island, now a protected area and ideal for spending the afternoon. Great for snorkeling and chill with a picknick.

Guides » In L'Esterre Bay are two islands, this is Sandy Island.

In front of Paradise Beach, at Carriacou in the West Indies, lies a tiny island with bright white sand.

It features an interior lagoon where you can snorkle in knee deep waters.

Around Sandy Island you will find some beautiful diving conditions.
Sandy Island is a beloved spot for sailing boats to pass the night in the sheltered waters of the interior.

A word of caution for sailors:
Please protect the corals and dont just drop your anchor on the precious coral formations that still exist there.
Protect the environment and keep it all tidy and clean.
That way others will be able to enjoy it too.

Sandy Island as seen from the air.

Sandy Island is an uninhabited cay lying off the west coast of Carriacou.

Surrounded by clear waters and coral reefs.
With an extensive white sand beach and quiet water on its south side and a palm canopy on the island.
It has long been a treasured spot for Carriacouans.
More recently, it has become a favored site for yachters, shore parties from cruise boats and SCUBA divers.

Sandy is a picture perfect island.

Photos of the island are often used as centerpieces of advertisements for the region.

Carriacouans have expressed concern about increasingly large losses of the island to erosion during severe storms.
This degradation of the island and the surrounding reefs is believed to be associated with the intensified tourist traffic. 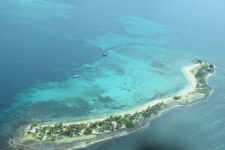 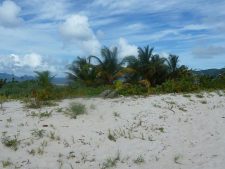 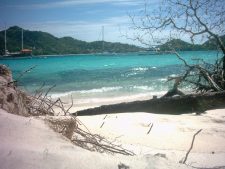 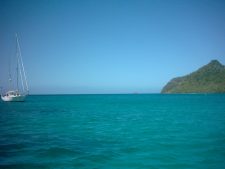 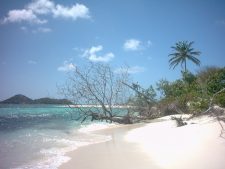 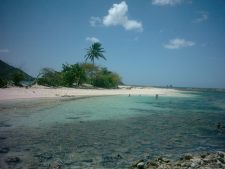 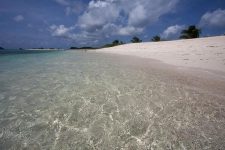 Proposals have been made to implement a number of conservation measures.
A preliminary survey of the nature and health of the shallow water (0-4 m) coral communities.
These corals are the most important in relation to erosion of the island.

The survey was conducted on June 20, 1996 by David Patriquin.
He had previously visited the island and taken underwater photos there in 1969.
Dr. Wayne Hunte reviewed a draft of the report.
The work was conducted as a volunteer activity.

The deeper water around Sandy Island.

Coral communities in water deeper than 3-4 m on the east and northeast flanks of the island appeared to be in generally good condition.
As an exception there has been some anchor damage of beds of finger coral.

The sea bottom on the south protected side of the island where yachts anchor is sand and rock with some beds of finger coral.
These beds have been completely destroyed by anchors.
Heavy growth of algae in the area is suggestive of nutrient and organic pollution from boats.

The east, north and west flanks of the island have been built up by growth of the elkhorn coral Acropora palmata  in the reef crest zone (0.5-3.5 m).
Covered by living thickets of this species when Prof. Patriquin visited the site in 1969.
Today this zone consists of a now dead, algal covered “elkhorn coral framework”.

The highly degraded condition of the elkhorn coral is attributable primarily to two diseases.
These coral diseases were not of local origin.
However, local factors (overfishing and nutrient pollution) may have exacerbated the problem.

The elkhorn coral suffered near 100% mortality at many locales in the Caribbean (including Sandy Island).
This happened due to an outbreak of “White Band Disease” in the late 70’s/early 80’s.
It has not since recovered, nor have other species filled its niche.

The high algal cover is attributable to a second disease epidemic which caused mass mortalities of the long spined black sea urchin (Diadema antillarum ).
This massive death started throughout the Caribbean in 1983/84 .
The sea urchin has only recently begun to be seen in significant numbers again, and only at some locales.

Why does the coral recover so slowly?

Corals are slow growing species which are readily overgrown by faster growing algae.
Especially when the algae are not regularly grazed by herbivores or when excessive nutrient input stimulates very rapid algal growth.

As well as encroaching on corals, the heavy algal growth suppresses settlement of coral larvae on old coral, which helps to perpetuate an algal dominated state.
Surgeonfish, parrotfish, and black sea urchins are the most important herbivores in the Caribbean.

Intensive fishing reduces the populations of herbivorous fish, leaving the black sea urchin as the principal herbivore.
Hence, when the sea urchins died off, algal growth on shallow reefs increased sharply, except where there were still large fish populations.

Fish and sealife around Sandy Island.

Today at Sandy Island, fish stocks appear to be low and the black sea urchin is just beginning to reestablish.
Most of the massive structures formed by elkhorn coral remain at Sandy Island.
Some still in the original growth position and some broken down.
These still provide protection to the island.

Over the east and northeast flanks of the island, this old framework is now firmly bound together by encrusting coralline algae and other binding organisms, and is probably quite resistant to further disruption.

However, on the northwest and west flanks it shows exceptionally heavy growth of mat-forming and bushy algae.
Possibly stimulated by nutrient pollution from yachts.
Such has prevented growth of encrusting organisms, and the framework can be pulled apart by hand.

Erosion of the reef.

Residents report that recent erosion of the island has been most severe on the northwest sector of the island.
This occurred when storm waves approached from the northwest.
This can be attributed to puncturing of the fragile elkhorn coral framework in that area.
In the absence of regeneration or elkhorn coral, it appears likely that Sandy Island would eventually be lost entirely.
This loss would occur mostly through catastrophic events, rather than gradually.
The catastrophic losses will become increasingly large relative to what’s left with each event.

Unexpectedly, the survey revealed a new population of healthy, living elkhorn coral.
Probably not more than a few years old, on the east flank of the island.

Colonies up to 75 cm maximum linear dimension were observed, in densities of 1-6 colonies per 4 sq meter area.
Also in that region, long spined, black sea urchins are abundant.
There is low algal cover of dead coral.

Density of living elkhorn coral and of sea urchins in the reef crest zone decline in a gradient from east to west on the north side of the island.
Correspondingly, algal cover increases, forming thick mats over the old elkhorn coral, towards the west of the island.

No living elkhorn coral was observed on the northwest and west flanks. Black sea urchins were observed in only one patch on the west flank; they were maintaining the patch largely free of algae, in marked contrast to the adjacent areas which bore thick algal mats and had no sea urchins. These patterns suggest that re-establishment of elkhorn coral on the east flank was dependent on prior re-establishment of black sea urchins and their grazing down of algae on the old coral. This situation is of considerable interest scientifically, and is especially encouraging in regard to Sandy Island, because if offers the possibility that elkhorn coral is “on its way back”. We suggest that the recovery process could be accelerated by establishing ” recovery centres” in areas now covered by thick algal mats. This would involve scraping to remove the algal mat, introducing sea urchins to maintain a low cover, and once the urchins have stabilized and algal cover remains low, transplanting elkhorn coral into the sites. Once established, it would be critical that the potential for physical damage to the new colonies by swimmers and boats is reduced to an absolute minimum. Reducing nutrient and organic pollution from yachts and shore parties, and allowing larger standing stocks of herbivorous fishes to develop would further increase the chances of success.
Other measures proposed by Carriacouans to protect the integrity of the existing coral populations, such as establishing permanent moorings for boats, limiting numbers of visitors at one time, removing garbage, reducing wave force by sinking a wreck to create an artificial reef off of the northwest flank and increasing the erosion resistance of the island by planting more vegetation, are sensible, and can help the shallow water communities to return to a more healthy and attractive state.
The proposed development of the site with an educational focus is a very appropriate initiative. The Sandy Island system, while limited in extent, illustrates most of the major features of healthy Caribbean reefs, and spatially and historically, the major features of reef decline, both natural, and anthropogenic, and of local and non-local origin. It is an excellent “lab” in which to test and develop some new coral reef management techniques which could help to ensure and accelerate the return of elkhorn coral, and probably other species.
These features, together with the convenience of access to the site, its symbolic significance as an idyllic tropical isle, and the obvious sentiment of Carriacouans towards Sandy Island make it, potentially, a valuable research and educational site. Developed in this context, restoration of the Sandy island reefs could stimulate more broadly based community based restoration and conservation of coral reefs, and provide new economic opportunities.
Acknowledgements
This study was conducted in response to a request from Dario Sandrini and Dr. Marina Fastigi, Directors of the Kido Project Environmental Station in Carriacou, as a follow-up to a previous request by the Carriacou Environmental Committee for a scientific survey of the coral communities at Sandy Island. Permission to conduct the survey was granted by the Chief Fisheries Officer for Grenada, James Finlay. Prof. Patriquin’s visit to Sandy Island on June 20, 1996 by was facilitated by Mrs. Ester Fleary, Director at the Grenada Board of Tourism for Carriacou. Cuthbert Snagg volunteered transportation. The Kido Project Environmental Station provided some on site support, and computer facilities for preparing an initial draft of the report. Prof. Patriquin’s participation was financed indirectly and in part by the Bellairs Research Institute and through Prof. Patriquin’s employment at Dalhousie University.